Home » Blog » What Are Interpersonal Conflicts And How To Resolve Them

What Are Interpersonal Conflicts And How To Resolve Them 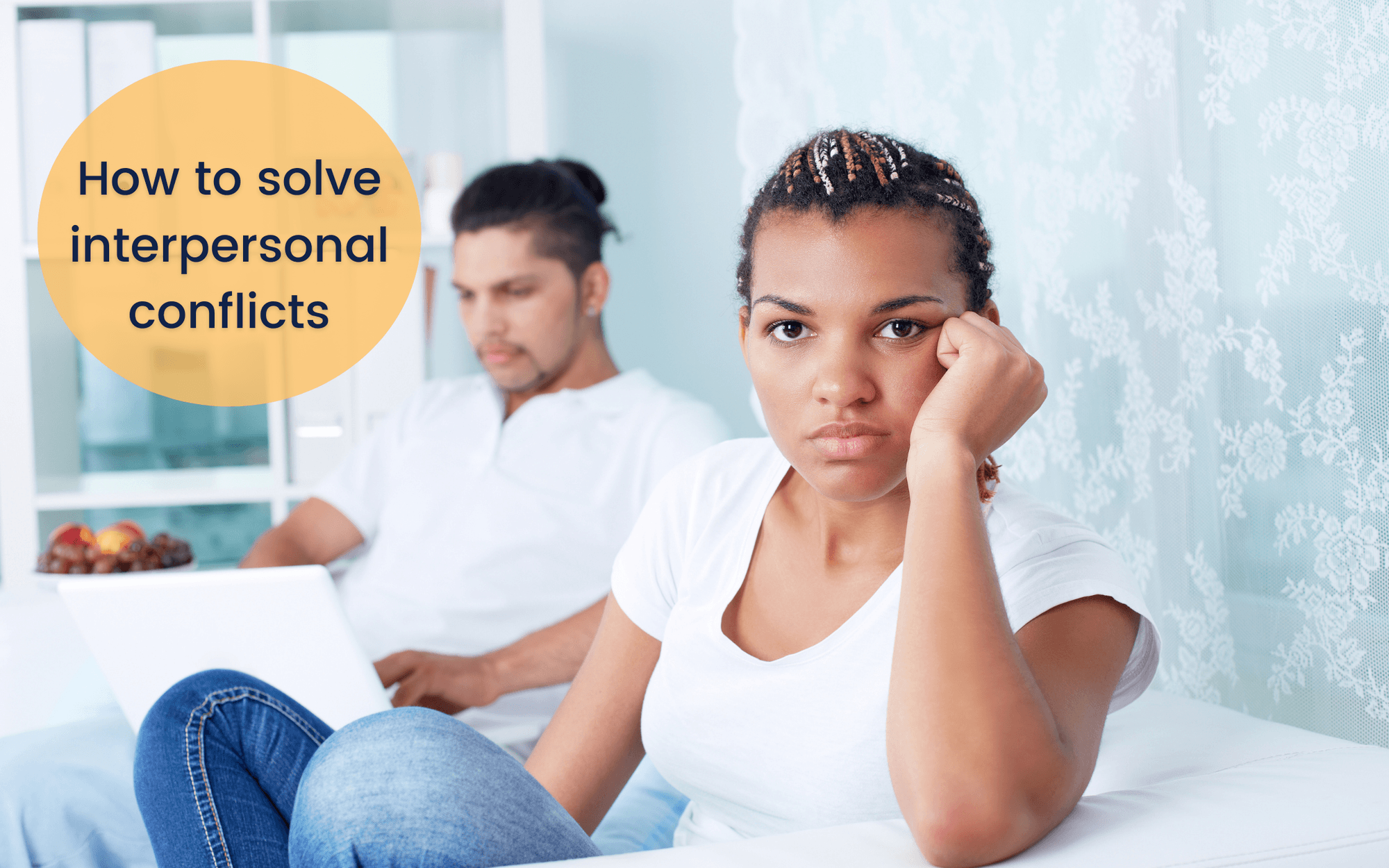 Conflicts are old as the human race. Any situation that involves two or more people has the potential to become a conflict. The earliest conflicts have occurred over territory, food, and other scarce resources. In this piece, we shall focus on interpersonal conflicts and how to solve them.

Firstly, let us look at the definition of a conflict.

Simply put, a conflict is a serious disagreement. It arises when individuals have different interests, values, opinions, and they cannot find a middle ground.

Further, there exist several types of conflict that happen between people. These are:

Let us explore each of these conflicts in a little more detail.

A single individual experiences this kind of conflict. People experience intrapersonal conflicts on a daily basis when their values, goals, or roles diverge. However, the simple act of prioritization resolves these conflicts.

Some examples of this type of conflict are choices such as –

This situation occurs when individuals tend to differ on the end goal and the approach, amongst other things. Interpersonal conflicts can escalate quickly, and things can become personal if not resolved in the nick of time.

An example of an intragroup conflict is disagreement on the timing of a product launch.

Intergroup conflicts, as the name suggests, are conflicts between different groups. These groups can be within an organization or outside of it. These occur when the teams in question do not have the same overarching goals. It becomes the responsibility of the organization to ensure that these conflicts do not get out of hand.

The whole firm must work towards the overall progress of the firm in a seamless manner.

Why Do Interpersonal Conflicts Happen?

A significant reason that these conflicts happen is due to poor communication. For instance, a lack of clarity about outcomes, timelines, and deliverables in a project often leads to interpersonal conflicts at the workplace. This is a classic case that can be avoided by communicating clearly with all the stakeholders. Employees must be proactive in minimizing such situations.

READ ALSO  What Is A Creative Consultant? Hire Or Become One

Every individual has a different personality that he brings to the workplace. Some people are reserved and tend to be serious individuals, which is in sharp contrast to people who are more energetic, loud, and cheerful.

Since these personalities are at opposite ends of the spectrum, there is a greater likelihood of conflict. More extroverted people are viewed as taking their work lightly, and such assumptions increase the chances of interpersonal conflicts.

Trust issues amongst colleagues could lead to interpersonal conflicts. When colleagues are wary of each other, the office environment becomes toxic, and the team lacks cohesion.

Interpersonal conflicts are more common when people having different interests work together. They find it challenging to compromise and reach a solution acceptable to all members.

A person’s goals must be in sync with the overall objectives of the team or the organization. People with common goals understand their roles and responsibilities better, and hence they work better as a unit.

Now that we have a basic understanding of why interpersonal conflicts occur. Let us examine their types.

There are many different kinds of interpersonal conflicts. So let us examine each one in a little more detail in this section.

These conflicts occur when the parties involved believe that they have different end goals but, in reality, have the same end goal. Here a misunderstanding leads to a difference of opinion.

Pseudo conflicts take the form of trivial arguments that, in turn, hide the root cause of the problem. Additionally, there are also chances that pseudo conflicts result in teasing or mocking.

Pseudo conflicts are generally resolved through a simple clarification.

This is another type of interpersonal conflict. Suppose you say that the tomato is a fruit while your friend claims it is a vegetable, and a fact conflict has occurred. As illustrated, a fact conflict occurs over a piece of information.

These conflicts can be quickly resolved. All a person needs to do is to check a verifiable source.

This kind of interpersonal conflict occurs when the interested parties have a completely different approach to a particular situation. These different opinions or practices arise due to several factors: education, perspective, circumstances, upbringing, etc.

Policy-related conflicts are common in the workplace, and these are resolved by finding a solution that fits the given situation. However, mostly a middle ground is preferred.

These occur when the individuals involved have diverse value systems. For instance, a colleague of yours might believe it’s acceptable to work beyond office hours for the firm. However, this might go entirely against your mindset. Value conflicts are one of the hardest to resolve, and it is best to acknowledge and respect the fact that everyone has different priorities in life.

READ ALSO  Is Healthcare A Good Career Path? An Overview

In this conflict, a person puts his pride at stake. Ego conflicts happen because of small resentments that build up over time. For instance, if the manager constantly criticizes a team member and praises another, it results in an ego conflict. This kind of interpersonal conflict is also the result of linking results to intelligence.

Moreover, judgemental remarks also fuel ego conflicts, and the attention is diverted from the issue at hand in an ego conflict.

As mentioned initially, conflicts have been a part of human evolution, and so has conflict resolution. The ability to diffuse tensions between people is a handy skill. There are various tried and tested methods to resolve conflicts. Let us look at them below:

It is essential that the parties involved in an interpersonal conflict talk to one another. Keep all channels of communication open. However, merely talking does not help. One has to understand the other person’s point of view truly. These conversations must be warm and pleasant. Both individuals have to stick to the topic at hand.

This is a vital part of the conflict resolution process. One has to pay attention to and process what the other person is saying. Here, a person has to observe both verbal and non-verbal cues to get the message completely. Moreover, one should not take the other stakeholder’s concerns lightly.

Being an attentive listener and placing oneself in another person’s shoes go a long way in resolving conflicts. Displaying empathy is a great way to show that you care about the other individuals involved and are a team player in the true sense of the word.

A significant reason why interpersonal conflicts fester and remain unsolved for a long time is resentment among colleagues. One must always make efforts to clear the air, apologize if necessary and move on. This helps a person focus on the job instead of creating a toxic environment at the workplace.

Clear communication is the key to avoiding a lot of conflicts at the workplace. One has to be articulate in explaining why a particular task cannot be done. This is extremely helpful when a person is facing unrealistic deadlines. Some valuable pointers to improving communication are:

While resolving an interpersonal conflict, it is imperative to chart a solution that involves all the parties. Then both groups can begin the process of resolution. This includes the following steps- defining the conflict, deciding upon the framework of the conflict, creating alternatives, and reaching a solution.

READ ALSO  What is Rehireable? And The Impact Of Being Non-Rehireable?

A workplace will always have interpersonal conflicts. This is because of the varying nature of job responsibilities, reaction to pressure situations, and interaction styles, to name a few of the many factors that exist.

Every interpersonal situation has a solution in which everyone wins. – Del Close.

One cannot always hope to stay away from conflicts, and thus adopting a mature approach that leads to resolution with minimal friction is the best long-term solution.

Is It Bad To Apply To Multiple Jobs At The Same Company
15 Networking Tips For After You are Hired at a New Job
What Are Some Good Signs You Got The Job?
Is Metal Fabrication A Good Career Path? An Overview