Silence, Brand! Marketers, Don’t Do Social Media Before Reading It 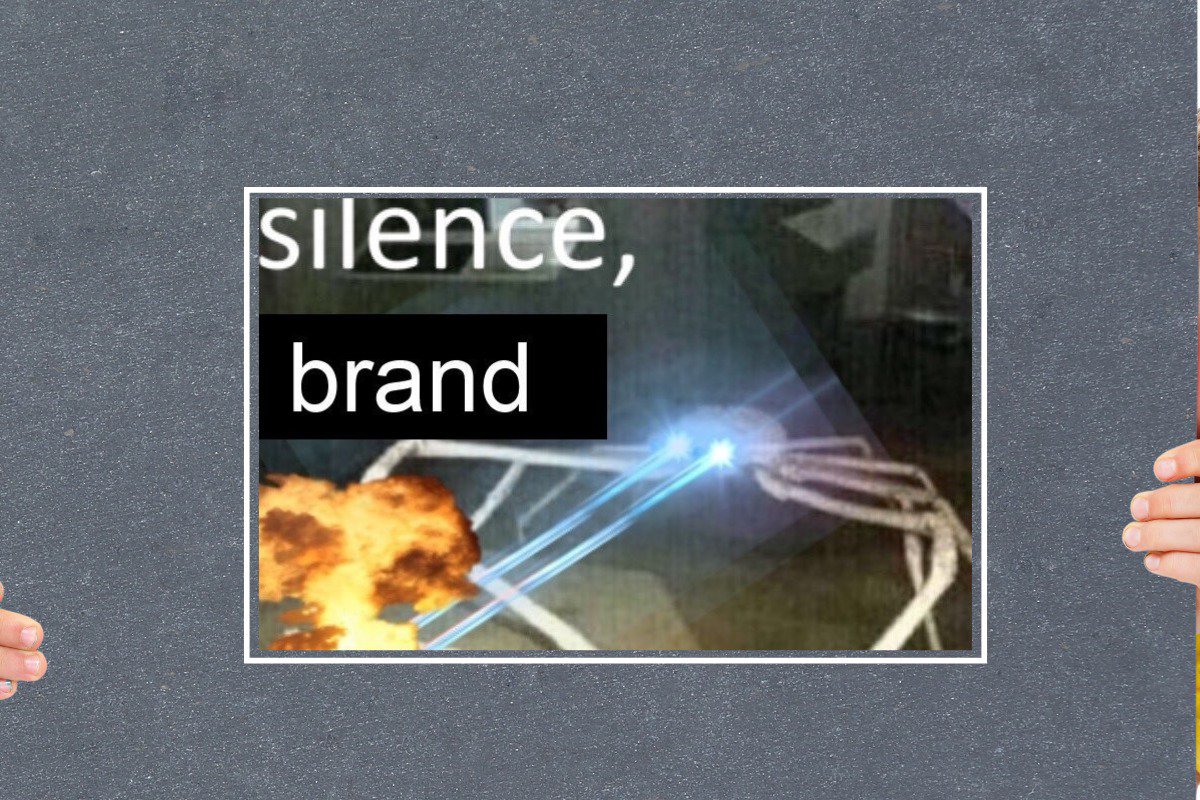 Social media is a wonder of our times. It is a space where people can express themselves freely. But it can also be harsh at times. Ask any celebrity who was on the wrong end of a Twitter backlash. Or ask brands that got countless silence brand memes in the comment section.

We will talk about the meme in detail. For now, let’s stick to the mixed bag that is social media. It can do wonders for entrepreneurs and artists. But it can also force the biggest brands in the world to issue lengthy apologies. In simple words, social media can pick you up and put you down.

And that’s how powerful social media is today. As of 2021, there are 3.96 billion social media users worldwide. As you would expect, brands wanted to make the most of this power. They could now reach a worldwide audience. And so, they rushed to social media platforms to market themselves.

Some brands found quite a lot of success. And most brands got it wrong, to begin with. That’s when the meme “Silence, Brand!” and hashtag #silencebrand starting to take shape. Let’s talk about the history of the meme, but first, let’s understand its meaning.

What is the silence brand meme?

The “Silence, Brand!” meme is a joke about how brands or companies on social media are trying to be socially engaged, relatable, friendly, or funny to get users’ attention and promote themselves, their products, and services.

For many social media users, it seems to be inauthentic and, most of the time, annoying. And that’s when they post the “silence, brand!” meme, and the #silencebrand hashtag started to be used.

The meme tries to show companies that users see the possible false intentions behind the coolness, friendly tone, environmental concern, or social engagement. For them, brands are using these messages to promote themselves.

But what gave birth to the silence brand meme? Let’s start from the point when brands first arrived on social media.

And then will talk about lessons brands can learn from the entire saga. But let’s start from the start!

The Arrival of Brands on Social Media

The arrival of brands on social media wasn’t much of an event. Some companies launched polls that got a reasonable response. Other companies ran mildly successful campaigns with the help of giveaways. But when it comes to tapping into the internet culture, they weren’t successful.

Denny’s is an American restaurant chain that has over 1,700 branches worldwide. In April 2013, Denny’s created their official Tumblr account. And this account changed everything for brands on social media. There was something different in how Denny’s engaged with users on Tumblr.

They curated memes around their food items that people found hilarious. Also, they indulged in some friendly banter with other Tumblr users. And some of these interactions are famous to this day. Here’s one example from the vast Denny’s Tumblr collection:

READ ALSO  The Essential Guide Of An eCommerce Consultant: Choose Or Become One.

As a result of such interactions and their memes, Denny’s Tumblr account was a hit. They were a success because of their social media team’s meme sense. And Denny’s had done what other brands were trying to do for years.

They had successfully tapped into the internet culture. And the social media audience loved every bit of it.

As you would expect, other brands wanted the same success. They begin hiring social media marketing teams. And that’s where some brands overdid it while others tried to mimic Denny’s tone and personality. That’s how it slowly builds towards the arrival of the silence brand meme.

Other Brands Jumping In

A lot of brands tried in vain to get Denny’s success. And there are some examples of brands embarrassing themselves.

Take Wendy’s failed attempt at tapping into the internet culture. Their 2015 commercial featured a character named “The Memer.”

Here’s a snapshot of that commercial that has since seen countless parodies:

Social media wasted no time in calling this commercial entirely out of touch. Viewers termed their commercial everything from dated to cringe-worthy. There are some other examples of brands missing the mark by miles on social media.

Brands started failing to mimic Denny’s success, and people thought it would never happen. The success of Denny’s Tumblr might be a one-off, they thought. The young social media audience will never let corporates be a part of the culture.

But soon, a social media revolution of sorts happened for these brands. McDonald’s, Burger King, Wendy’s, and Chick-Fil-A stepped in.

Now, every other brand had a social media account with a quirky, relatable personality. They had everyday banters with one another. You could find clever comebacks and disses all over Twitter.

Here’s an example of Burger King replying to a tweet by Kanye West to diss their competitor McDonald’s:

In the beginning, social media users loved it. After all, brands were acting just like they do on social media. The weird, quirky personality of these corporate accounts matched their own. As a result, they began sharing and retweeting.

To these brands, this was a cause of celebration. After years of failing to reach young audiences, they were finally successful. They begin enjoying every bit of it. Their social media marketers got pay raises and everything.

But soon, things began going out of hand. And that’s when the silence brand meme was born!

Brands began gaining the publicity they wanted on social media. The weird, quirky personality of their accounts was working. And that’s when some of these brands began overdoing it.

To some social media users, their daily bantering was getting too much. Also, brands began commenting on everything on social media.

And that’s when we began seeing social media fails by companies. Here’s what DiGiorno Pizza tweeted with the #WhyIStayed. To make things clear, this hashtag was in defense of domestic abuse victims.

READ ALSO  What is Intent-Based Marketing? Why is it Called the Future of Marketing?

But these fails are not the only reason why the silence brand meme was born. There are some other reasons at play here.

Here is another one that just gave up. The brand promoting a product over a joke. The user added the silence brand and blocked McDonald’s:

Some brands have decided to go with the flow. They even make jokes about this meme, and it seems to be a more honest way of talking to the users. Check out this example of BarkBox, which is a monthly gift box for dogs.

In this tweet, the user was pretty clear about what not to do:

What about this one, being ironic about the social causes defended by brands:

For a while, brands on Twitter were funny. But then, social media users began to see through the ruse. After all, what is the purpose behind all the comic banters and memes? What are brands looking to gain from the social media following? They want people to buy their products, that’s all.

After all, these brands are brands. They are not real people, but their social media accounts make them look like it. And that’s why all the humor and personality seem inauthentic.

In other words, it is another way to advertise their brand. It is a manipulative attempt at portraying a buddy image in front of the young social media audience. When in reality, they are corporations looking to make profits wherever they can. They’re not your buddies having fun on social media.

And when more and more people realized it, the silence brand meme was born. Here’s what the meme looks like:

The “silence brand” meme did not shut up any brands, though. But brands and marketers should take essential lessons from it. So, what marketing lessons can you take from the biggest anti-marketing meme? Let’s find out!

Lessons From the Silence Brand Meme

Brands reacted differently to the silence brand meme. Some outright ignored it while others gave a reply. Some even twisted the meme to continue with their banter. Here’s how Funyuns did that:

Earlier, we saw a blunder made by a brand on social media. Why do brands make such mistakes?

It is because they want to comment on every issue. They want to jump on every meme bandwagon. In simple words, they overdo it with their tweets and banters. And they get a resounding silence brand in reply.

READ ALSO  How to Sell to Millennials: 8 Essentials You Should Know

That’s why it is essential to understand how vital silence is in today’s day and age. Your brand doesn’t have to go completely silent as the meme wants. But you should also avoid being at it all the time.

Instead, look to engage around topics relevant to your brand. You can be funny and relatable while talking about things you know. Why not speak on topics your brand has authority over? It will earn your brand the respect that most brands squander.

These brands pretend to be too woke! Others try to come off as too cool! And they want to comment on everything under the sun. The key is to avoid making such mistakes. Why? Because sometimes, silence is golden.

Based on the “Silence Brand” Meme, What Not to Do in Marketing?

After checking dozens of memes, we come up with the following learnings:

Learning From the Blunders

If you look for it, you will find countless social media fails by companies. Your brand might have made similar mistakes in the past. The key is to learn from the blunders. After all, brands need to change with time to survive.

So, not making the same mistakes is not enough. You also have to gain something from what went wrong. And when you get the lessons right, make sure you remember them. If you do that, your brand can steer away from the “silence brand” putdowns.

4 thoughts on “Silence, Brand! Marketers, Don’t Do Social Media Before Reading It”